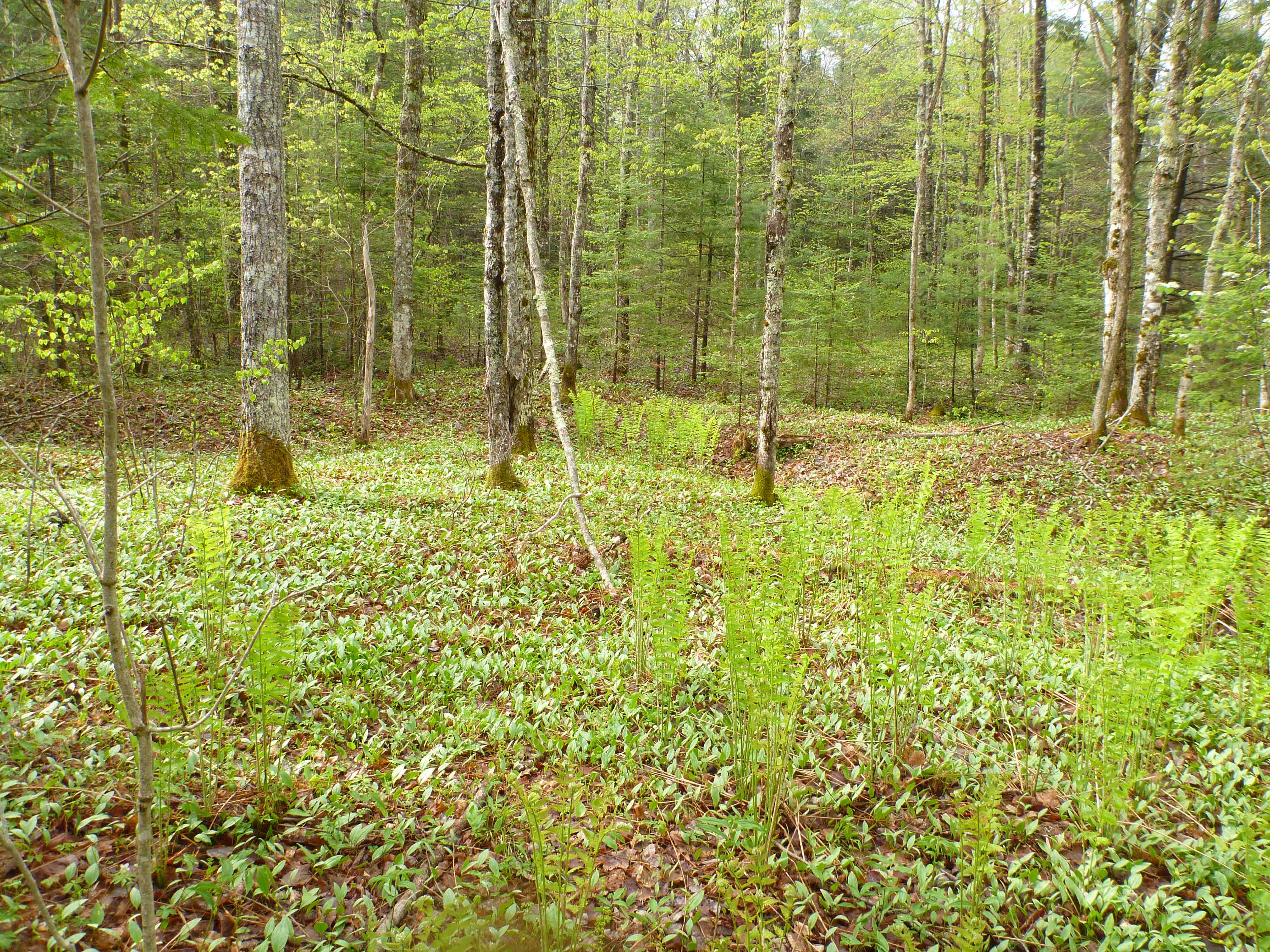 Those who like to forage in the woods know mid-May marks the time for fiddleheads. These delectable green coils emerge from the ground and grow up into what most people know as ostrich ferns. The key is to harvest them just as they start to reach for the sky. I have looked all over the woods behind my house and have found only one small patch, so when my friend Bridget asked if I’d like to go with her to her special spot somewhere in Searsmont, I jumped at the chance. Most foragers keep their special places secret, but Bridget is a wonderfully generous person and does not play by the same rules as most people. She gave me a pound of fiddleheads a few years ago when I admired her harvest in a Facebook photo—really one of my best Facebook moments ever.

We agreed to meet at 5:45 a.m. and I was to bring a backpack lined with a plastic bag, a small bucket for picking, drinking water and my boots. She picked me up and off we went into the wilds of Waldo County, down a dirt road past several old farmhouses, before finally parking by a big stream, donning our backpacks and setting off on a faint path into the woods. Bridget says this spot is known to many fiddlehead foragers and that she also often meets people fishing along this stream, which runs into a larger river. But she seems confident we’ll find plenty of ferns today.

The running water provides a steady background to cheerful bird songs and the squish of our feet on the wet ground. The trees have only just begun to leaf out. Instead silvery, lichen-laced trunks stand out in the early light. We soon come to the largest patch of trout lilies I’ve ever seen. Their mottled white and olive-green leaves cover the ground, giving way here and there to tall, fuzzy ferns (not fiddleheads) and a few yellow, trumpet-shaped blooms.

As we walk Bridget tells me fiddleheads are finicky, preferring sandy soil near running water. She learned about fiddleheads from her mother growing up in Aroostook County. 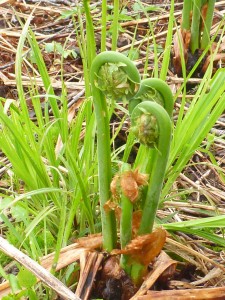 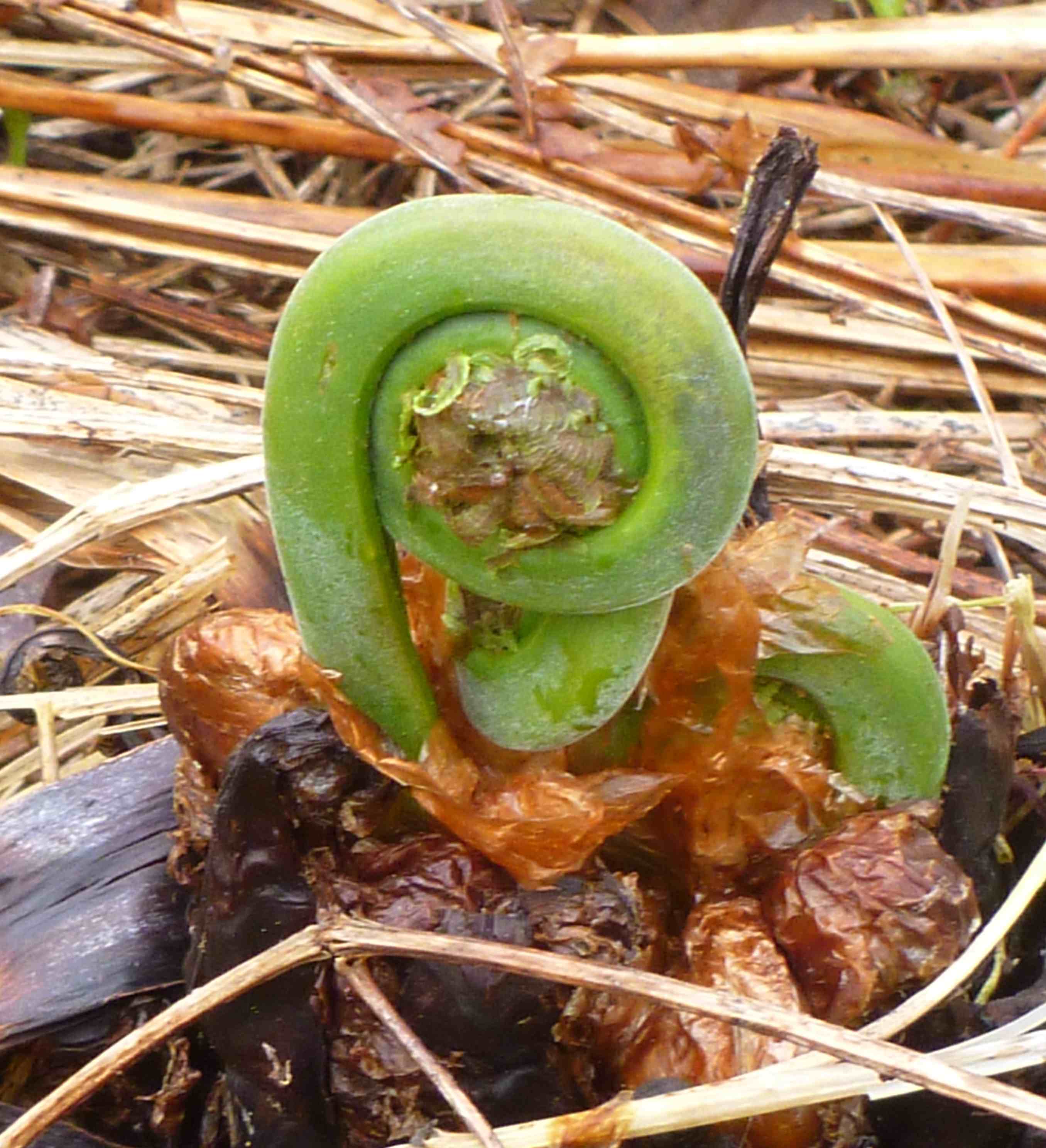 The first patch we find have grown past the fiddlehead stage into two-foot tall ferns. Full grown they can stand up to five feet high. Fiddleheads, so-called because they look like the curved scroll on the end of a violin, must be harvested just as they emerge from their crowns. That’s when their fronds remain tucked into tight coils. Bridget often knows she has found a patch when she steps on the bumpy crowns, one distinctive feature of these ferns. Other identifying characteristics of fiddleheads include their smooth, deep u-shaped stems and a papery brown covering on the coils. I’ve read enough about the ferns to know the importance of proper identification. Eating the wrong ferns can make you sick, as can eating an under-cooked fiddlehead. Bridget says she boils them for at least 15 minutes. This is really important because fiddleheads contain some kind of bacteria or chemical that merely sautéing in a pan does not kill. Food scientists have not identified the cause of the problem, according to University of Maine Professor of Food Safety Dr. Jason Bolton.

“We just know that cooking for a fair amount of time destroys whatever it is,” he says.

Properly steamed or boiled, fiddleheads taste like a combination of fresh grass and asparagus, like Maine woods in the spring. I usually boil them and then sauté them in oil. This year I might also try pickling. My mother’s friend, Peggy, says fiddleheads are carcinogenic. But Bolton says the cancer-causing ferns are some other type. He also told me potatoes contain some kind of carcinogen. But I’ll write about that some other time.

The next patch we find contains loads of perfect fiddleheads and we pick until the sun comes out and black flies arrive. I have been careful to harvest only a few fronds from each plant, figuring that will help promote the health of the fern, although it’s clear many of these fiddleheads are just the first set of shoots. We also have to pick around slightly brown fiddleheads that have been nipped by a frost earlier in the week. Eventually we fill our packs and head back.

When we get back home, I realize the picking was the easy part. Cleaning off the papery coverings requires much soaking and rinsing in the sink. Bridget says she likes to use an air compressor to blow the husks off, but it rained yesterday and these fiddleheads are damp so that won’t work.

I fill my big sink and get to work. As I’m cleaning, my husband comes home and looks at the pile of green. “You’re crazy,” he says as I tell him my haul weighed in at 15 pounds. He quickly adds, “That’s why I married you.”

All is well at my house. And tonight for dinner? Fiddleheads with pasta and sausage. Tomorrow? Fiddleheads again, maybe.

One thought on “Fiddling Around”